Rachel Burnham writes: Yesterday’s conference on Social HR organised by CIPD Manchester, brought together people from with a very wide range of HR backgrounds – generalists, recruitment specialists, L&Ders, equality & diversity consultants and so on, not only from Manchester, but farther afield.  Some were brand new to social media and a little bit sceptical; some participants had done some social media, but didn’t really get it; some wanted to build on what they are already doing; and some of us were social media enthusiasts.  A wide spectrum of experience.

The thing that struck me both on the day and afterwards wasn’t the tremendous range of social media tools out there – though there are a staggering array of different tools.   It wasn’t the many, many different ways that you can use social media in HR.  It wasn’t even the amazing energy present amongst participants as we got working together in the event and sharing ideas & asking questions.

What struck me the most is the big difference it makes once you get a sense of how social media can be useful professionally.  The crucial difference I noticed was not really between social media users and non-users (although there is an overlap with this), or even to do with levels of expertise in using social media, but between those who’ve grasped something of the possibilities that social media opens up for working life and those who currently see social media being just personal and probably rather fluffy.  (And of course with all those animal photos being shared and all that discussion of chinchilla’s there is definitely some fluffiness!)

If you aren’t using social media at all or are using it just for personal use, it can be hard to imagine just how much it can be used professionally.

I think this is the big first step.  The bit that requires the leap of faith.  The step into the unknown.  Because until you give it a try, you can’t really work out just how social media can be useful for you, in your particular work, in your specific context, and just how it can fit into your already busy day.

That’s where I was 18 months ago. At that stage the only social media, I made use of was LinkedIn and that was only very feebly, as I had a limited CV held on it.  And then everything changed and I decided I really needed to give some ‘new’ things a go – well they were ‘new’ to me.  Over about a fortnight, I set up a personal Facebook page, a professional Facebook page, updated my LinkedIn account, began using Twitter and began writing a blog, which because I decided to publish on Blogger, meant setting up on Google+ too.

And breathe! That was a busy fortnight!

And I was rather scared doing this.  It was a step into the unknown for me. 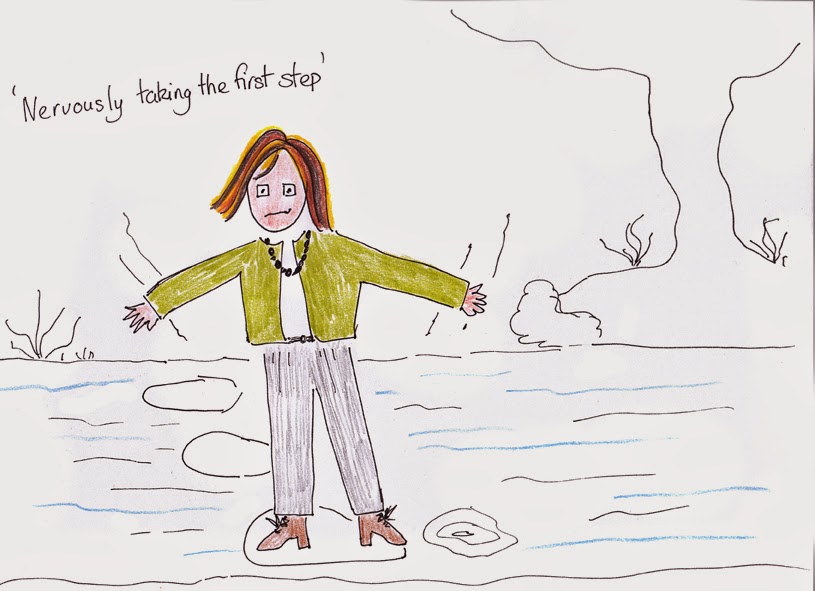 I had resisted Facebook for ages – my main concern being how to keep a professional approach if my clients were mingling with my friends – many of later are Viking re-enactors & frankly a bit unusual – I solved that by having the two pages and simply not letting professional contacts become Facebook friends.  You can probably tell that I’m feeling much more relaxed about that issue now.

With Twitter I simply couldn’t see how it could be useful professionally.  Prior to the decision to join, I only knew two things about Twitter – 140 characters and that Stephen Fry tweets a lot.  I am forever grateful to the Certificate in Learning & Development Practice (CLDP) students who introduced me to using Twitter professionally – I always to say to new CLDP groups that I will learn lots from them & I think they often don’t believe me, but it is inevitably true.

At first I did find Twitter confusing – it is a bit like jumping on a crowded commuter train, in which lots of travellers are all talking at once and usually to someone at the other end of the carriage.  Since you have missed the beginning of the conversation and have no idea who any of these @XXX’s are, or what RTs and DMs are, it can be hard to unravel.   From listening to the stories told yesterday, I think this is what often gives people a bit of a wobble.  So stick with it.  Because there are lots of friendly HR & L&D people out there who will only be too glad to encourage and help you to make sense of it.

I can’t believe what a big difference social media has made to the way I’m working, the work I’m doing, the people I’m in touch with, the growth in confidence and thirst for learning I’m feeling now.

There is a lovely jazz piece ‘The Computer Age (In Motion)’ by the singer Susannah McCorkle, who wrote the very funny lyric to an infectious tune by the Brazilian drummer, Thelmo Porto.  She wrote the lyrics before the impact of social media and so the refrain goes:

And we don’t know where we are heading for – but if you want to find out, you need to take that seemingly big first step and join in.

If you do take that first step, there will be lots of hands outstretched to welcome you.  So, why not take that step now?

Here are some resources to help you take that first step in using Twitter for professional development.

Burnham L & D Consultancy helps L&D professionals become even more effective.  I am particularly interested in blended learning, the uses of social media for learning,
Posted by Rachel Burnham at 9:03 AM