Rachel Burnham writes: Back in the autumn there was a slew of blog articles about the value of silence and the importance of having space in our lives to think and consider.  In some of these pieces the author related this to meeting their needs as an introvert and as a fellow introvert this interested me.  I began to contemplate this article then, but somehow never found the space to write it…


Now, feeling the benefits of the break over Christmas and the space that gave me, I have made space to write this.


It is a commonplace when thinking about silence and the need for space in our lives to begin by acknowledging the sheer business of our lives and the myriad of information flows competing for our attention.  Particularly if you are into social media, like to read and have the usual array of electronic devices pumping radio, TV, and online options into your home and phone.  So I will take that as a given.


In the autumn, I started to switch off from the computer and social media for one day a week on a Saturday.  I felt I would benefit from time away – a proper break from work - and partly so that I could fully concentrate on other stuff.   I didn’t do this in a conscious ‘turning over a new leaf’ sort of way, it sort of emerged and then I found I liked it and did it more consciously.  I don’t have a hard and fast rule, so I might dip into Twitter, but I try hard not to have to turn my computer on.


I have been enjoying having silent times on Saturdays – not always possible when family is in and around our small house – but I like having even small pools of silence – shutting the kitchen door when cooking for example or working quietly on the allotment in the afternoon, when most of the regulars have already finished for the day.


I like have a task to do, one that engages my hands, but not is not too demanding – weeding always works, washing up is a good standby and during the winter I have been mending by hand a piece of upholstered furniture – just for the sheer pleasure to be quiet and contemplate.


One day in October, when I was in the house alone, working on that furniture, I just listened and thought about the ‘silence’.  It was still warm and I had the windows throughout the house open.  Here is what I heard:


Constant noises – the washing machine downstairs, water through the pipes, the soft drone of traffic on the nearby arterial road out of Manchester, a zooming noise – possible hoovering by a neighbour.


Intermittent noises – sounds like someone hammering, a vehicle slamming on the breaks, a car swerving, children laughing, person calling out, person shouting, bottles clanking in a crate – perhaps someone loading up the recycling bin, a door within the house creaking open, bird song (various), the sound of the wind – leaves rustling and my favourite the sound of a leaf falling (well, maybe a twig). 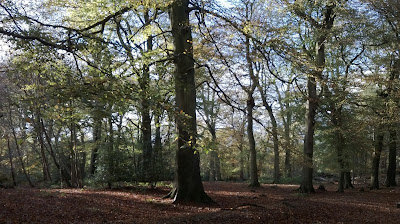 So, not silent at all.  And how much we miss, when we don’t pause and listen!


Often, it is when I’m silent that I really have time to think, recall, remember and make sense of what has happened, what I have read, heard, seen, said and done.  And can learn from it.  This links to Harold Jarche’s ‘Seek, Sense and Share’ framework.

Yesterday I began reading ‘Cat’s Eye’ by Margaret Atwood.  It begins by reflecting on time ‘You don’t look back along time but down through it, like water.  Sometimes this comes to the surface, sometimes that, sometimes nothing.’ 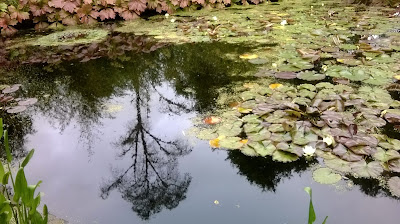 And that’s how it seems to me in those moments of silence and space that memories surface – sometimes old and often more recent.


One day in that silence in the autumn, I found myself seeing again my grandad’s hands – brief but vivid scenes of time spent with him when I was a child – he died when I was about 8.  His hands planting young leek plants, puddling them in and his thumbs and fingers firming the rich dark soil around the slender green slip.   Entranced, as he tied string around the neck of a jam jar to create a handle so my sister and I could collect and pick blackberries with him.  Stretching up to reach a shrub hanging over a redbrick wall of a garden and taking a cutting with the small olive green pruning scissors, I now have as my own – and my feelings of deep embarrassment at a church minister cutting at someone’s plant in the street!  You can tell that he influenced my love of gardening.


And sometimes in the silence, it is things that I have read – blogs and articles, or heard, questions asked and unasked, things I have said, things I wished I had said and things I wished I hadn’t said – that surface.  Sometimes connections are made or contradictions become clear – previously unnoticed.   Patterns emerge.  Ideas or new questions to ask or chasms of understanding appear.  Sometimes, it is possible to see how my actions contributed to something positive or played a part in something less successful and it is possible to identify different options, alternative courses of action that I could take in the future.  Reflections. Sense-making of the past, sense-making for now, sense-making for future actions.


But for me, none of that sense-making possible without silence and space.

Posted by Rachel Burnham at 1:28 PM No comments:

Rachel Burnham writes: ‘Running, roaring, each step soaring’ comes from the wonderful lyrics to ‘Milestones’ – the tune is of course by trumpeter Miles Davis and the lyric is by Jim Britt. 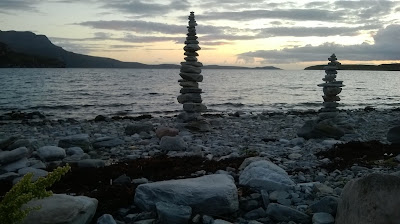 Like many people over the Christmas period, I have taken the opportunity to do some well-needed clearing out of cupboards and shelves – I’m rather embarrassed to admit that I have managed to fill 5 black sacks just from my wardrobe and chest of drawers alone!  As usual I listened to music whilst doing this and in the process heard this track again, reminding me of a blog that I had begun but never finished.  About 18 months ago, @sukhpabial set up a Carnival of Blogs on a theme relating to ‘steps’ or something on those lines  – and I planned to write a piece based on this lyric, but I got stuck, abandoned the idea and wrote something else instead.


But now I can’t get these lyrics and this tune out of my head and so I simply have to write about them.  Here’s a link to Mark Murphy singing ‘Milestones’ - why not have a listen?


I like the urgency suggested by the lyric, the emphasis on grasping the time right now, the call to action ‘Pick up your speed, it’s what you need, you can’t stay in bed!’ and the personal challenge ‘Hear that voice now, it’s your choice now’.  All of which feel right for the start of a New Year and for a profession that is under challenge and has so much to shape up to face.

Miles Davis is well-known for his continual ability, throughout his long career as a jazz musician, to keep refreshing and reinventing his music, changing direction and sound.


Jazz has taken many forms since the early 20th century and writers have commented how each fresh expression of jazz seems to have come from a revisiting and appreciation of the blues, reinterpreting this in new contexts and for each new age. So tradition can be a source of strength and innovation.  In jazz, I think there are only two constants – some element of improvisation and being polyrhythmic – everything else is up for grabs.


The singer, Mark Murphy, is one of my all-time favourite singers.  I’d love to say that I first heard him sing in a jazz club in New York on Fifty-Second Street, or in Chicago or New Orleans or even at Ronnie Scott’s in London, but the truth is that I first heard him sing in a small Friday night once a month jazz club in a basement of a pub in Stockport.   From the moment I heard him sing I was hooked on jazz.  Life changing moments can take place in the day to day of life in Stockport, Barnsley, Dundee, Tottenham, Swansea or Burnham-on-Sea.


So, whether your L&D life is based in Stockport or some other place – in the words of the song ‘Hear that voice now, it’s your choice now.’ And start working out what your L&D practice needs to be for the future – what to hold on to and what to do differently.