Rachel Burnham writes: With the reporting this week of a 5 fold-increase in the recording of race hate crimes since the announcement of the results of the EU referendum, I have been reminded of the work of Gordon Allport.


Gordon Allport wrote in 1954 a book titled ‘The Nature of Prejudice’ which explored how prejudice and discrimination operates in societies and in particular the growth of anti-Semitism in Germany in the years leading up to the 2nd World War.  It has been used since to analyse many situations across the world such as segregation in America, Apartheid in South Africa, the treatment of Gypsy and Traveller communities in Europe and genocide in Rwanda.  It has also been used to think about prejudice and discrimination in organisations, not just on the basis of race.  He distilled his thinking on this into a model, which I think is worth revisiting in the light of recent developments in the UK.


Thinking around discrimination and the nature of prejudice has of course developed since then and in particular work on unconscious bias has added considerably to these issues.  Nevertheless, I think it is worth looking again at Allport’s Scale. 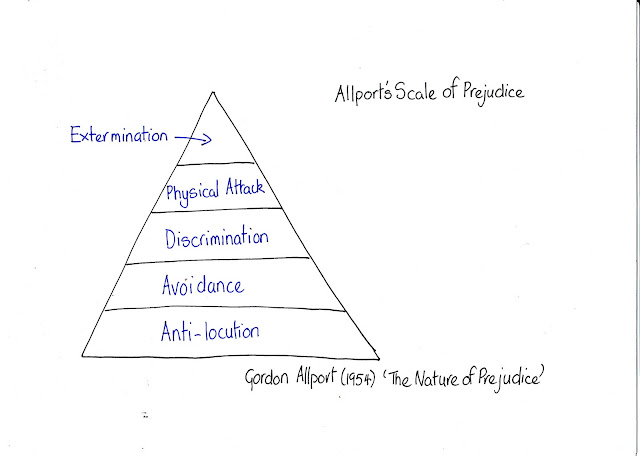 Allport’s Scale identifies five broad forms in which prejudice manifests and these are:


·       Avoidance – Individuals in the ‘in-group’ will distance themselves from people perceived to be in the ‘out-group’.  This can be individually or can be institutionalised.   Where there are already divides in a society (eg due to patterns of housing, school admission policies, access to work) this tends to allow confirmation of sterotypes and the negative portrayals from Antilocution.   Where people  don’t work, socialise or have meaningful contact prejudice can flourish.


·       Discrimination – Individuals and groups are denied access to opportunities and services.


·       Physical Attack – Individuals and property are subjected to attack.


·       Extermination – Allport referred here to the systematic killing of a group, but it can also include the murder of individuals and also where individuals are driven by their experiences of prejudice & discrimination to suicide. It can also include situations where people are driven out from an organisation or from a community (or country?).


Allport offers a description of how prejudice affects a society.  I think its importance is in the recognition it gives to the impact of both ‘speaking against’ and ‘avoidance’.  It suggests that tackling these two areas are crucial in challenging what is happening in the UK today.


This is not new.  We know this.  But it is easy to let things drift.  It is easy to be distracted by things that seem more urgent. It was easy to be complacent about progress towards a fairer society, particularly if discrimination is not part of your day to day experience.   But not right now – now it feels urgent and at the heart of what matters.

Posted by Rachel Burnham at 6:11 AM